Issue Before the Court:
Whether a search for weapons without probable cause for arrest is an unreasonable search
under the Fourth Amendment to the United States Constitution (“Constitution”)?
Rule of Law:
An officer may perform a search for weapons without a warrant, even without probable
cause, when the officer reasonably believes that the person may be armed and dangerous.
Application of Facts (Analysis):
Petitioner, John W. Terry, was stopped and searched by an officer after the officer observed
the Petitioner seemingly casing a store for a potential robbery. The officer noticed the
Petitioner talking with another individual on a street corner while repeatedly walking up
and down the same street. The men would periodically peer into a store window and then
talk some more. The men also spoke to a third man whom they eventually followed up the
street. The officer believed that the Petitioner and the other men were “casing” a store for a
potential robbery. The officer decided to approach the men for questioning, and given the
nature of the behavior the officer decided to perform a quick search of the men before
questioning. A quick frisking of the Petitioner produced a concealed weapon and the
Petitioner was charged with carrying a concealed weapon.
Conclusion by the Court:
The Supreme Court of the United States (“Supreme Court”) held that it is a reasonable
search when an officer performs a quick seizure and a limited search for weapons on a
person that the officer reasonably believes could be armed. A typical beat officer would be
unduly burdened by being prohibited from searching individuals that the officer suspects to
be armed.
Dissent. Justice William Douglas (“J. Douglas”) dissented, reasoning that the majority’s
holding would grant powers to officers to authorize a search and seizure that even a
magistrate would not possess. 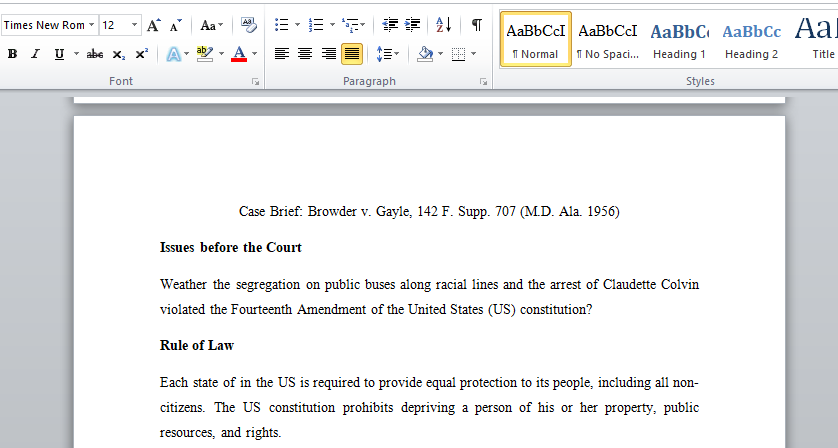