The Concept of the Network

The concept of the status quo is central to any simulation, as you read earlier. Another central concept to any simulation is a network. A network is “an interconnected or interrelated chain, group, or system” (Merriam-Webster (Links to an external site.)).

For example, a social network consists of you, your family, your friends, and your colleagues. Below is a visualization of this social network.

But, is your social network limited to just your family and friends?

No, your social network extends to the family of your family, or the friends of your friends, or the colleagues of your colleagues. Now, if this is the case, how would the above network image change?

There are several ways the network would change, for example, include:

Networks are all around us, and it is important to recognize that you a part of a network.

The economic network depicted above involves Caterpillar Bulldozers (Links to an external site.). I use this as an example because my 2-year son is interested in these objects.

Now, these bulldozers don’t just appear out of thin air. They are manufactured by the Caterpillar Inc. (Links to an external site.).

However, Caterpillar Inc. may have economic or business relationships with “makers” of components of the Caterpillar Bulldozer.

For example, Caterpillar Inc. may have relationships with steel makers, engine makers, tire makers, and drive system makers. These makers manufacture specific components that the Caterpillar company contracts for.

This is another example of a network.

Trade is a popular topic in US Government and Politics. The salience of trade is pronounced during times of political conflict between leaders of countries.

Trade consists of imports (items brought into a country) and exports (item sent out of a country).

You will observe that the document does not feature a “fancy” graphic of a network, like the examples of Your Social Network and An Economic Network have. Rather, the information is presented in table format.

However, with some effort, you could map the connections between the United States and five trading partners.

STEP 1: DRAW A NETWORK OF YOUR 4 SELECTED POLITICAL ACTORS AND DENOTE RELATIONSHIPS

STEP 2: DENOTE ONE OF THE 4 SELECTED POLITICAL ACTORS AS YOUR “REPRESENTED GROUP”

After you have completed drawing your network, write a 5-sentence explanation of your drawing. Here are some questions to consider helping your write an explanation:

There are two options to submit this assignment:

the 4 group i chose last week are:

so, state government has to be on the top from my understanding.. 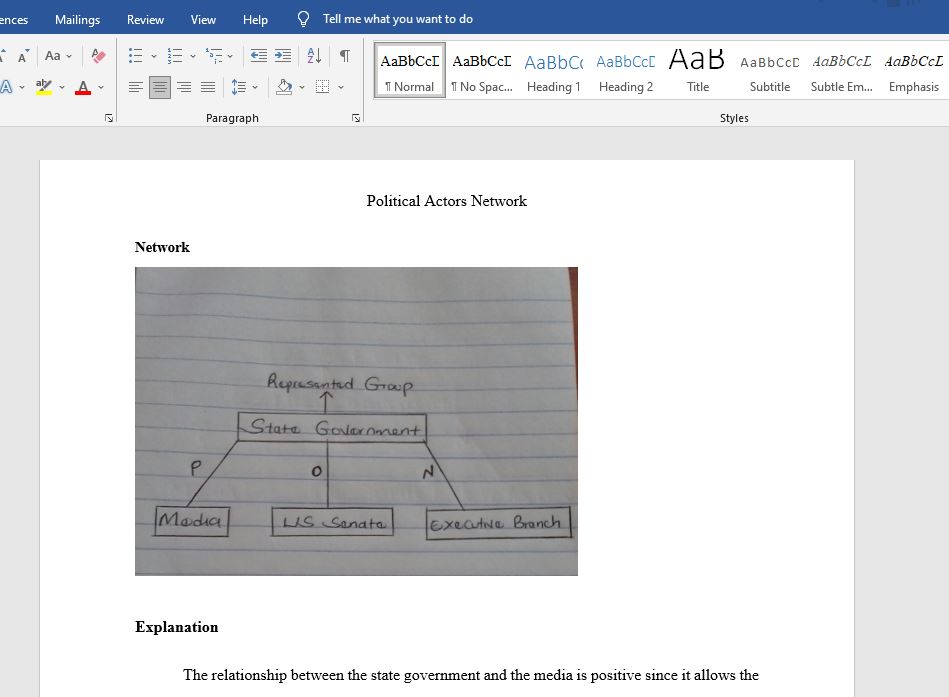