The condition, also called high blood pressure, refers to a higher than normal consistent
force that is exerted by blood against blood vessel walls, usually arteries. Though a person’s
blood pressure varies considerably throughout the day depending on the respective individual’s
levels of activities, there are established standard guidelines that define the blood pressure
accepted as normal for people’s health and wellbeing. Distinct medical publications agree with a
classification of normal blood pressure as having a systolic pressure of less than, or equal to
120mmHg and a diastolic pressure of below, or equal to 80mmHg. Therefore, any pressure
above the standard range is considered elevated, and consistency results in hypertension, usually
above 140mmHg systolic pressure. Besides, it is noteworthy that, although hypertension is not
classified as a cardiovascular condition, it is an important risk factor that triggers the
development of cardiovascular diseases. Globally, cardiovascular diseases are in the category of
communicable diseases that are the leading cause of high mortality rates. Long-term
hypertension has far-reaching implications as it permanently changes the structure and elasticity
of blood vessels, which ultimately affects the rate of blood flow to the heart, and other vital
organs, such as the brain, which increases the risks of developing diseases, such as heart disease,
heart failure, or stroke.
The discovery of hypertension, specifically the essential, or primary hypertension traces
back to the second half of the nineteenth century and ascribed to Frederick Mahomed in the early
1870s. During that time, Mahomed, who worked as a medical resident at a hospital in London
measured the general population’s blood pressure using a spring-based device that constituted a
portable model of a sphygmograph that he had previously developed. The device had the
potential to measure the tension of the radial pulse, and its invention marked a milestone for
healthcare (Johnson et al., 2015). However, the discovery was not usually used until the 1890s
where advanced sphygmomanometer models were developed, with a subsequent improvement of
the quality of the achieved results. Evidence indicates that during those times, systolic pressure
of above 140mmHg was uncommon especially among adults less than 65 years, contrary to the
contemporary trends. The practice for measuring BP became a standard procedure for clinicians
during the early decades of the first half of the twentieth century following the knowledge of the
increase in hypertension-related mortalities.
Essential hypertension is usually asymptomatic, which makes it hard to notice, hence also
called a silent killer. It is estimated that about one-third of people with hypertension are not
aware of it, which further complicates effective management and treatment of the condition.
Nonetheless, people with the condition are likely to experience varying indicators, such as
nervousness, insomnia, and facial flushing, which are associated with hypertension (Oparil et al.,
2018). Other ways that high blood pressure can manifest itself include sweating, and in severe
cases, headaches and nosebleeds. Patients who experience such symptoms should seek a
professional diagnosis. People with the disease may also experience difficulties in breathing,
chest pains, and vision problems. Other notable symptoms associated with hypertension include

fatigue and confusion, presence of blood in the urine, and constant pounding of distinct parts of
the body, such as the chest, neck, and ears. The absence of easily notable symptoms associated
hypertension causes the need for regular medical checkups for the population. It is
noteworthy that some of the postulated symptoms like nosebleeds and headaches only occur after
The blood pressure is extremely high, such as having a value of 180/120mmHg. Hypertensive
patients also need constant monitoring over time. 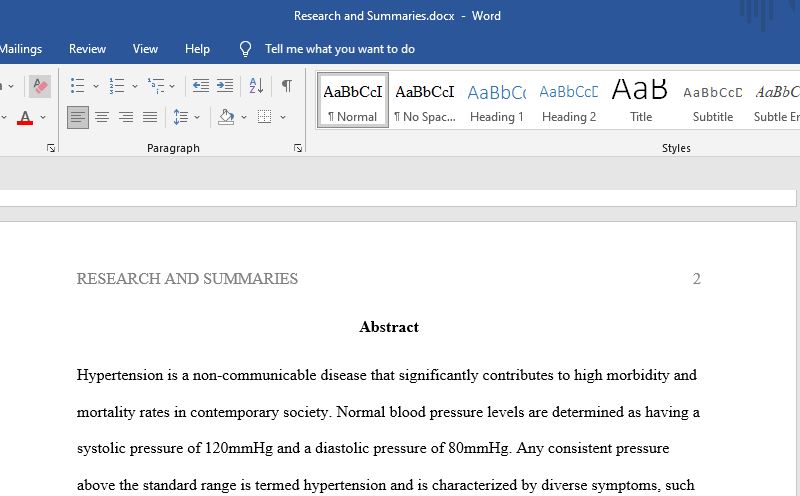