Respond to one of these prompts and be clear about which one you are referring to:

PROMPT #1: MORAL THEORIES. Which of the three moral theories discussed in lecture — utilitarianism (Mill), deontology (Kant), and virtue ethics (Aristotle) — do you support? Explain your answer. Could these theories be combined?

PROMPT #3: RISK ASSESSMENT. “Cost-benefit analysis is designed as a method of quantification, so it surely is better able to deal with more quantifiable aspects of the issues it confronts. But this limitation is in itself ethically neutral unless it can be shown that the quantifiable considerations systematically push decisions in a particular direction. Its detractors must show that the errors of cost-benefit analysis are systematically unjust or ineffective – for example, that it frequently helps the rich at the expense of the poor, or despoils the environment to the benefit of industry, or vice versa.” (Leonard & Zeckhauser 1983: 8). Do you agree with this position? Explain your answer.

PROMPT #5: MORAL RESPONSIBILITY. When there are crashes involving driverless cars, who should be held responsible? Explain your answer.

PROMPT #6: TROLLEY PROBLEM. What would you do in the Bystander at the Switch scenario? (A) Throw the switch in order to maximize well-being (five people surviving is greater than one.) (B) Not throw the switch because that would be a form of killing, and killing is inherently wrong. Explain and defend your answer. 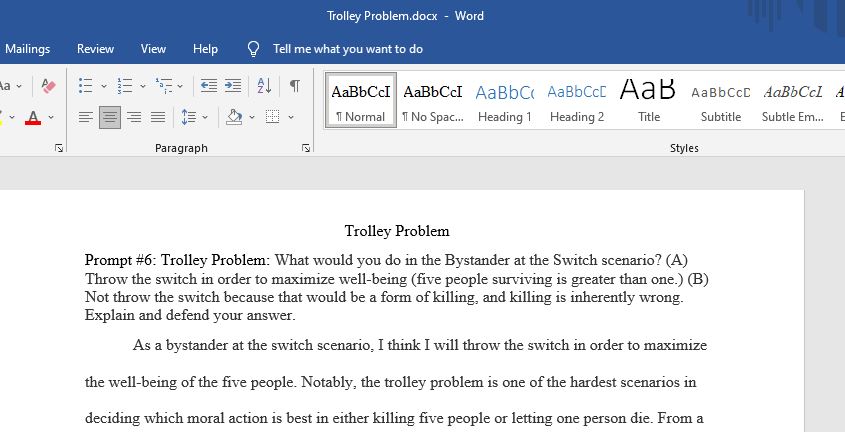