Evaluating the Impact of Culture in Nursing

Evaluating the Impact of Culture in Nursing

In clinical practice, subjects on ethnic differences are anessential part of providing care to the patients. Indeed, culture has a significant impact on diagnoses and treatment options due to various social beliefs and biological factors. Health care workers should be knowledgeable about cultural differences to improve the care of patients.

According to the admin in the Fusion HEALTHCARE STAFFING (2015), some culturessignificantly impact the clinical practices positively or negatively. For instance, family and community have certain beliefs that can result in difficulties between the health workers and the patient when misunderstood. For example, Asians and Pacific Islanders heavily rely on their extended families to decidethe patient’s proper treatment.

Religious beliefs greatly influence health practices; for instance, some believe some illnesses are an act of God and don’t need to follow doctors’ instructions or medication because God wants them sick.Also, the belief about medication has played a crucial role in nursing. For example, the Caucasians follow their medication and prescriptions to the latter (admin in the Fusion HEALTHCARE STAFFING, 2015). At the same time, the African-Americans and Native Americans don’t have much faith in medicines and have higher chances of stoppingtreatment prematurely.

The article addresses health care workers and individuals from different backgrounds. The health workers should be aware of other cultures’ beliefs and practices. Also, individuals from different ethnic backgrounds should speak out to the health workers on their beliefs to enable the health care workers to give them proper care and treatment. Moreover, informed consent was not addressed in this article.

The study conducted in this article was qualitative. The study had non-numerical information. The method of analysis used was discourse analysis to analyze interactions with people of different backgrounds. The data collection procedureswere interviewing the health workers individually and as a group and using questionnaires. Through the data collection procedures used, validity and reliability might be addressed; for instance,the questionnaires used were unstructured, making it easy to collect qualitative information(admin in the Fusion HEALTHCARE STAFFING, 2015). The questions contained in the questionnaire had a basic structure and some branching questions containing no questions that can limit the respondent’s responses. The questions were more open-minded. 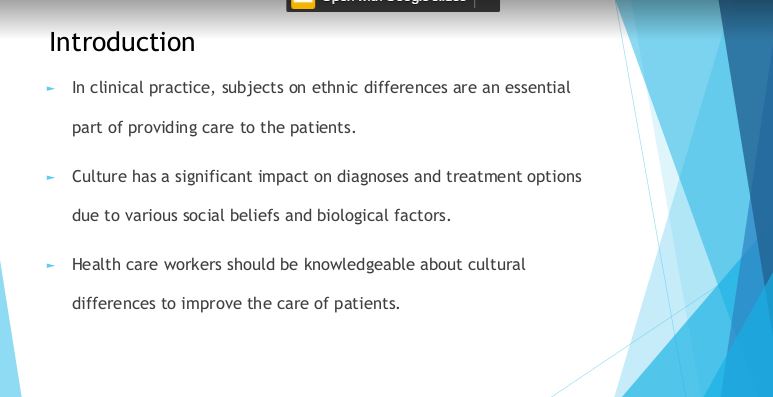