“Jadawel” a major retailer of household products in Saudi Arabia, had experienced steady growth during the past ten years since inception i.e. 2009. Mr. Badar, Marketing manager of the company has left the company in 2019. Mr. Hesham al Harby, who was working with Mr. Badr since 2009, now became marketing manager.

The company has been experiencing steadily declining sales in an increasingly competitive and growing market from last one year. Even after increase in sales force, sales were not meeting expectations, and had not been for some time. In fact, sales had begun to decline in a market that still appeared to be growing with more competitors chipping away at a market the company once owned. Rashid, a sales executive who joined the company in December 2019, said that he could not get proper training form the company. In a feedback of Customer, Jadawel’s product price is costly and lack of seasonal offers.

Mr.Khaled Al-ghassini, CEO has hired you to help him in increasing the company’s annual growth rate and ultimately its profitability.

“Jadawel” has 25 retail stores located mostly in shopping malls inalmost all the big cities in Saudi Arabia. Total revenue from the 25stores has declined, despite major back-end cost savings.

1. Identify the problem. [and other sub problems]

2. What could be the causes of problem?

a. Cause of the problem- 5 Why Technique

b. Develop a Cause and Effect Diagram

3. Gather information: What information should you gather that would be helpful to know before making a decision?

4. Consider the various choices of solution?

5. Make the decision. What should you do?

6. Evaluate the decision. Why do you think this is the best decision possible 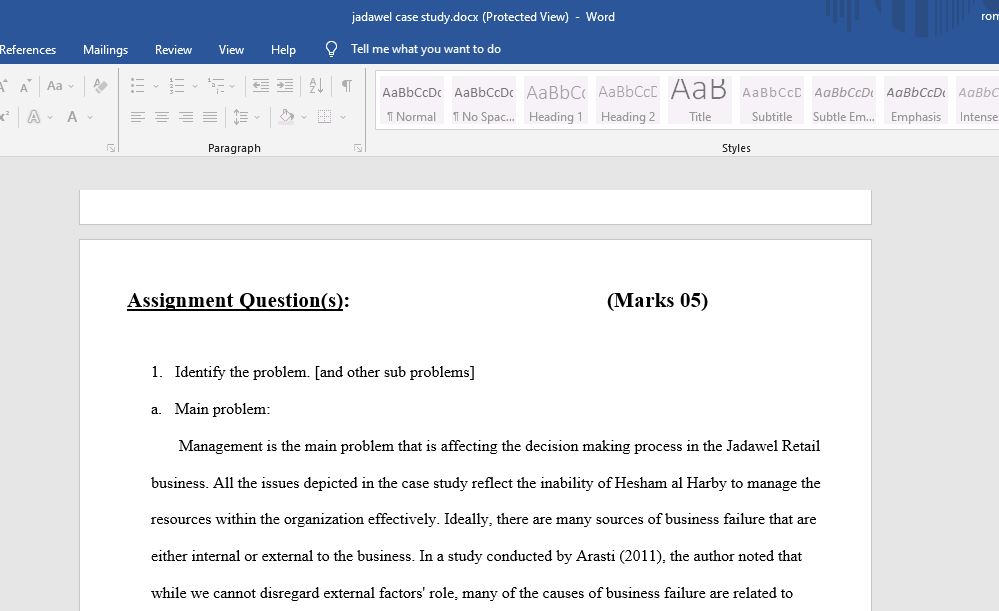