Explain the Effects of Racism and Inequality

Explain the Effects of Racism and Inequality

This quote by American writer, playwright, and social critic, James Baldwin, raises an unorthodox assertion about race that remains in question to this present day. In it, he claims that race is purely an invention, a figment of our imagination, a thing that we do. More specifically he claims that “white” or “whiteness” is an invention. Your midterm assignment is to employ a set of theories that we learned in class to engage Baldwin’s argument from a sociological perspective. Your task for this assignment is to use the course materials to unpack Baldwin’s statement, as well as to assert your own argument in response.

Questions you may want to probe are: What is “race”? What is “white”? How do policy, history, opinions, ideas, or social relations factor into your assessment. Is race real? If so, is it a choice? If race is, as Baldwin claims, “not about the color of anybody’s skin” but instead “imagined”, what is the purpose of this invention and how has it sustained itself for centuries? Further, if race is imagined, then does it even matter in this contemporary moment?

All content introduced throughout the course is appropriate to use in your response. At the minimum, you must engage at least three theories from the course readings, however you are welcome to use as many of them as you need to advance your argument. You may also draw on videos, movies, historical, and legal examples introduced during the lectures.

CITE ALL OF YOUR WORK—that goes for block quotes and ideas—and include a bibliography of all cited works. The paper should be 3-5 pages (excluding bibliography), double spaced, with 1-inch margins.

The Baldwin quote (What did he mean by that?)

Sociological Analysis (How would a sociologist respond?)

– Student should demonstrate ability to engage the Baldwin quote using sociological theories and frameworks to support their response. Avoid assumptions; back your arguments up with facts, warrants, and claims.

Critical Thinking & Argumentation (What do you think?)

– Offer your nuanced argument. Where do you agree or depart from Baldwin’s assertion and/or the theories you used? Why?

Writing Integrity (Is it well written?)

– Here we are looking for clear and concise writing, and a well structured argument.

Sociological Theories of Race and Racialization:

Game Show: What We Think We Know About Race

Fleming, Crystal Marie. How to Be Less Stupid About Race: On Racism, White Supremacy, and the Racial Divide. Beacon Press, 2018. [Introduction & Chapter 1]

Fleming, Crystal Marie. How to Be Less Stupid About Race: On Racism, White Supremacy, and the Racial Divide. Beacon Press, 2018. [Chapters 2 & 7]

Bonilla-Silva, Eduardo. Racism without racists: Color-blind racism and the persistence of racial inequality in the United States. Rowman & Littlefield, 2010. (Chapters 1, 2, & 3)

Race and the Self: On Identity and Subjectivity: 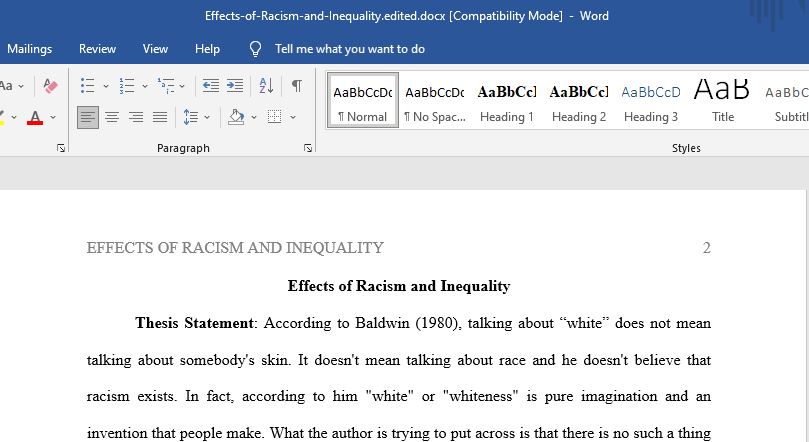