Discuss how language is symbolic.

Discuss how language is symbolic.

Remember that your goal for discussion is three-fold:

Keep in mind that when you post, you should always reference items you cite — be sure to use APA format for this. Also, be sure to refer back to the rubric as often as you need to during the week. The class is all about sharing knowledge, so use discussions as a way of creating a community resource for yourself and your colleagues.

The way I understand language being symbolic is that it is mere symbols that means different things in different cultures. The symbols are either written or spoken. Each culture has (or may have) it’s own style of shapes or designs to make up letters which are formed into words. Some cultures, such as native american, do not have written words it is all spoken language.

In comparing two of the rules of language and how it applies to verbal communication I feel a very important one would be phonetic or phonological. This refers to the way you shape your mouth (and tongue) to make the sounds for the letters which you then turn into words. In English this can be confusing as so many letters are shaped the same in written form but make different sounds. An example of this would be the letter E(e). This can make the sound hard as in eh, a word would be get. It also can be soft as in ee. An example of this would be the word be. It can also be a long sound as in geese, when you use the letter twice. If I am understanding the meaning correctly, another important one would be pragmatic. This to me refers to our culture uses words and how we understand the meaning of the word. Some examples of this could be words in the english language that are spelled the same yet are completely different words with different meanings. The word READ, in the sentence “I learned how to read in kindergarten” is a different meaning than the sentence “I just read that book and it was amazing!”. This is why the say the English language is the hardest language to learn. We have many words that follow this example of being spelled the same yet pronounced differently. Then for fun we add in they’re, their, and there.

The most powerful takeaway I learned from this week’s reading was, “words have no meaning unless we assign them meaning, (Hamilton et al., 2019).” Without symbols within language, we could not express “feelings, ideas, object, or events into our day-to-day experience, (Hamilton, 2019).” Symbols represent all the above. As a kid, I loved to walk through the woods. One day, I came upon a sign on a fence that read, “NO TRESPASSING.” I ignored it and climbed the fence. A few months later, I walked the same path and saw the sign again. This time it read, “NO TRESPASSING,” and a symbol for “high voltage.” I never climbed that fence again. The symbol conveyed far more than the words ever did. So true the point is, “… images and emotions are aroused when a word is said or heard, give connotative meaning, (Hamilton, 2019).”

As an Interpreter, I am sensitive to phonological rules. In other words, how words sound when spoken. Once I was interpreting for a man who said, “I was walking on the beach with my girlfriend….” I interpreted it as if he was with someone intimately until he continued to say, “and we met up with my wife.” Then I realized the sound of his communication when he mentioned his girlfriend was said like a “friend,” who was a “girl,” or a woman in this case. The phonological rules were applied here, and I was able to adjust quickly. Contrastingly, semantic rules “dictate the range of meanings that a particular language group assigns to a word, (Hamilton, 2019).” I enjoyed the section that spoke of the different phrases around the world and what they really mean. That was fascinating to me! Honestly, if I were of that group, it would make sense, but some were unfamiliar to me because I am not from that country or culture. Language truly is a miracle when you really stop to meditate on it.

Journal: In at least 200 words, please respond to the following: 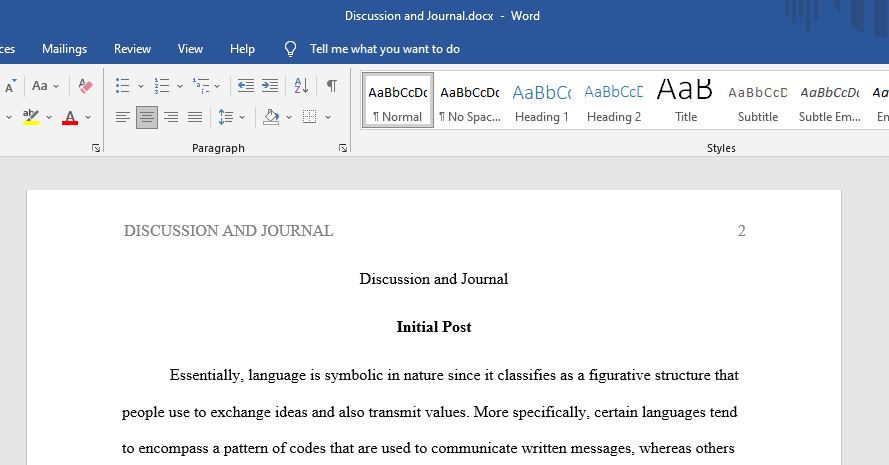