Discuss the ethical issues educators face and how they can and should be resolved.

Discuss the ethical issues educators face and how they can and should be resolved.

STICKING TO YOUR GUNS

It’s Spirit Day during Homecoming Week at Central High School and the students are excited. The week is full of special events, and the upcoming football game, parade, and dance are all anyone is talking about. Today most of the students are not only dressed in school colors, but many have chosen to wear silly outfits that have caught the attention and admiration of their peers.

Tyler, one of Central’s most promising seniors, is a popular student who is well-liked by his teachers and his classmates. He’s class president, captain of the soccer team, an honor roll student, and is on the homecoming court. He’s also one of the students who has chosen to dress outlandishly today.

Jenna, one of Tyler’s best friends, is in the same calculus class as he is. As Jenna walks into class, Tyler immediately begins to give her a hard time for wearing her cross country warm-ups to school instead of something crazy. He says, “Why are you wearing these?” and tugs on her pants, pulling them low enough to show her underwear. Jenna shrieks, which draws the attention of several students and their teacher, Mrs. Warren.

Mrs. Warren quickly assesses the situation and sends Tyler to the principal, Mr. Brody, on the grounds that he has engaged in inappropriate sexual conduct on school grounds. The punishment for a violation of this sort is three days of out-of-school suspension. School rules say that any student who receives out-of-school suspension must be back in school for one day prior to attending any school-sponsored event. The length of Tyler’s suspension means he cannot attend homecoming.

Tyler defends himself to the principal by describing the situation and pointing out that his behavior was an accident and was not sexual at all. He says he didn’t realize how loose Jenna’s pants were or that tugging on them would pull them as low as it did. He argues that if he must be suspended, it should be for only one day, given that he simply made a mistake. Jenna also defends Tyler, saying that although his actions caught her by surprise, she was in no way offended by them and did not feel as though he was attempting anything sexual. She argues that Tyler is her best friend, and she knows him well. He would never do something that would make her or any other female feel degraded or violated, and everyone knows that. His actions were meant to be teasing, and nothing more.

Tyler’s parents are outraged by the accusation. This is Tyler’s senior year and he has never had a single disciplinary referral prior to now. They argue that everyone, including Mrs. Warren, knows that he is a good kid who would never actually do something like she has said he’s done. They are also furious that this accusation means he cannot attend the homecoming dance during his senior year when he is on the homecoming court. He also now must report that he was suspended on any college application that asks. They argue that the consequences are significantly more severe than the crime, and suggest that this is motivated by Mrs. Warren’s obvious disdain for popular students.

Mr. Brody questions Mrs. Warren’s assessment of the situation. Given how well he knows both Tyler and Jenna, he is inclined to believe that this was not a case of inappropriate misconduct. He is also hesitant to enforce such a strong punishment when the evidence is simply not there. Plus, no other teacher refers students to his office as often as Mrs. Warren does, and more often than not, it is for behavior that should have been dealt with in the classroom. It has become difficult for him to know when a student has truly done something in her classroom that is worthy of a referral or if Mrs. Warren has simply overreacted. Plus, Tyler’s mom is on the school board. He really has no desire to go head to head with her on this issue. He asks Mrs. Warren to reconsider her accusation.

Mrs. Warren, however, is frustrated that her evaluation of the situation is being questioned and believes Mr. Brody is asking her to change her position simply because of who Tyler is. She’s grown weary over the years of what she perceives to be preferential treatment for popular, high achieving students. She’s seen these students behave inappropriately with no consequences, and has begun to feel as though she must either tolerate bad behavior in her classroom or run the risk of losing face when her principal does not support her. She decides that this is the last time she will let Mr. Brody embarrass her by ignoring her reports and stands by her assessment of the situation. After all, it doesn’t matter what was or was not revealed, pulling down another student’s pants at school is entirely inappropriate. And had another student done this same thing, one who was not as well-liked and popular as Tyler, that student would face the consequences that are now facing Tyler. It’s time to let everyone know that a violation is a violation, and everyone will be held to the same expectations for appropriate student conduct.

Teachers at the school are divided in their opinion of the issue. Many of them side with Mrs. Warren, as they too have felt a lack of support from Mr. Brody when they have reported discipline problems to his office. They agree that a violation is a violation and that the consequences should not be dependent upon whether you’re popular or earn good grades or have parents who are willing to stand up for you. Students should be treated equally, and this situation is clearly an example of inequity. But others disagree with Mrs. Warren and accuse her of making an example of Tyler without considering what it means for him as a human being. Had Tyler actually engaged in genuinely inappropriate sexual conduct at school, this would all make sense. But no one who was there, except Mrs. Warren, perceives his behavior as sexually motivated. They argue that that is hardly enough evidence to punish Tyler to this extent and that Mrs. Warren is basing her decision solely on her personal issues with the principal.

This is an opportunity for you to consider some of the ethical issues educators face and how they can and should be resolved. Provide your recommendations to address further action. Read the details of the ethic case Study in the Content area of Week 6 and answer the following two questions.

Your responses should contain at least three in-text citations from the assigned textbook. No outside research is needed. The paper should follow APA format, including double-spaced text, 12-point font size, and 1” margins. A reference list is required. This paper should be a minimum of 750 words. 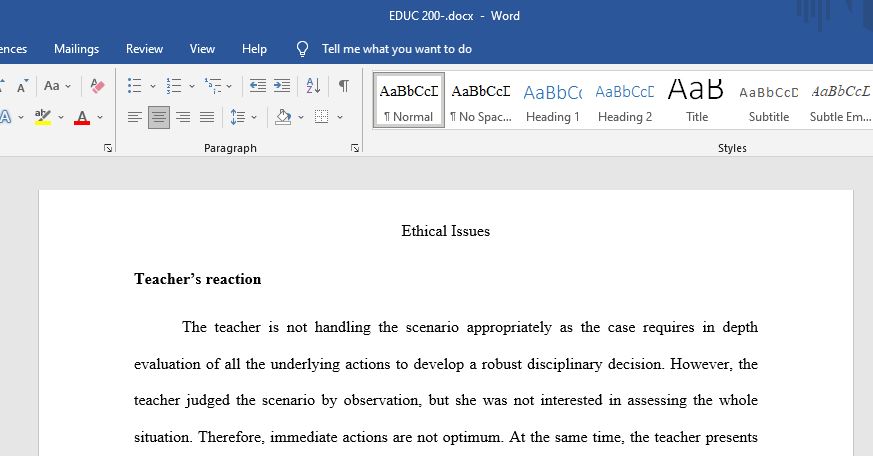