A case study on Ahmed and Umi Khadi

A case study on Ahmed and Umi Khadi

Select any scenario out of given 5 from information file. Open file name helpful material, follow all information given to you and I have also mentioned examples for everything what u need to do like how u make an abstract, introduction, body, conclusion and reference list and how the structure will going to look like so strongly follow the information provided.

Scenario 1: Ahmed &amp; Umi Khadi
Ahmed is a 13 year old youth who lives with his Mother (Umi Khadi) and two siblings in the town of Littlemore. Littlemore has a population of 2500 people. Littlemore has a small 6 bed local hospital staffed by a Registered Nurse with Telemedicine link up facilities to a major hospital in the city of Packmore – some 600 km away. The closest children’s specialist hospital is also located in Packmore. The Royal Flying Doctor Service assists in transporting patients between these hospitals in emergency situations. Ahmed often flies alone during these transports as his mother must drive with his two siblings to Packmore. He remains very frightened of flying, however, tries to be brave so his mother is not too anxious.
Ahmed lives with  haemophilia. His condition requires daily treatment using a synthetic blood product that his mother administers at home by having to set up an intravenous line to deliver the medication which costs $600 per month out of pocket expenses. Ahmed’s mother has no family support in the area however she does have access to a social worker through the Haemophilia unit at Packmore Hospital. Ahmed’s father works abroad and is
waiting for a visa to come to Australia. Ahmed sees himself as the head of the household in his father’s absence but feels inadequate, as he cannot always mow the lawn nor do the outside work due to his health condition. When he last spoke with the registered nurse.
Ahmed indicated he felt guilty because his mother had to do the jobs he should be doing and she also has to work to be able to pay for his additional needs such as equipment and medicine. He has asked the nurse on many occasions, “why me?” Ahmed sometimes cries
at night when he is alone as he feels he has no control over his body or choices about his health. He does find prayer a source of comfort.
Ahmed misses out on school for weeks at a time when he experiences a significant bleed into his joints. At these times, Ahmed remains at home and is in a wheel chair. The school has 800 students and the buildings are demountable units with stairs. Ahmed sometimes requires treatment at the hospital when his routine ‘at home’ protocol is not effective.

He misses his friends at school when he is away but he tries to keep up with his schoolwork, as he wants to become a doctor one day.
Ahmed is a happy young boy who enjoys going to school and has several interests including the chess club and drama classes. He has few male friends, as he is unable to participate in popular contact sports such as basketball and football that his schoolmates play most lunch times and on the weekend. Sometimes Ahmed is teased at school and called a “drug addict” as he has to carry supplies of injectable and a sharps container to school in case he requires additional medication. This teasing makes him feel hurt as it is against his religion to use drugs. Ahmed wants to be able to administer his own medication now that he is in high school. 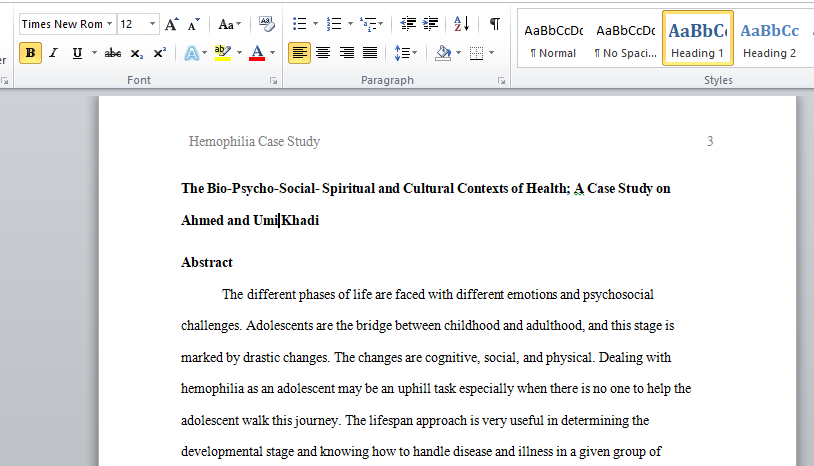